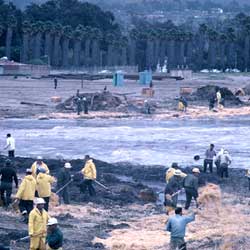 On the afternoon of January 28, 1969, an environmental nightmare began in Santa Barbara, California. A Union Oil Co. platform stationed six miles off the coast of Summerland suffered a blowout. Oil workers had drilled a wel

l down 3500 feet below the ocean floor. Riggers began to retrieve the pipe in order to replace a drill bit when the “mud” used to maintain pressure became dangerously low. A natural gas blowout occurred. An initial attempt to cap the hole was successful but led to a tremendous buildup of pressure. The expanding mass created five breaks in an east-west fault on the ocean floor, releasing oil and gas from deep beneath the earth.

For eleven days, oil workers struggled to cap the rupture. During that time, 200,000 gallons of crude oil bubbled to the surface and was spread into a 800 square mile slick by winds and swells. Incoming tides brought the thick tar to beaches from Rincon Point to Goleta, marring 35 miles of coastline. Beaches with off-shore kelp forests were spared the worst as kelp fronds kept most of the tar from coming ashore. The slick also moved south, tarring Anacapa Island’s Frenchy’s Cove and beaches on Santa Cruz, Santa Rosa and San Miguel Islands.

Animals that depended on the sea were hard hit. Incoming tides brought the corpses of dead seals and dolphins. Oil had clogged the blowholes of the dolphins, causing massive lung hemorrhages. Animals that ingested the oil were poisoned. In the months that followed, gray whales migrating to their calving and breeding grounds in Baja California avoided the channel —their main route south.

The oil took its toll on the seabird population. Shorebirds like plovers, godwits and willets which feed on sand creatures fled the area. But diving birds which must get their nourishment from the waters themselves became soaked with tar.

The Santa Barbara Zoo was among three emergency bird treatment centers established during the disaster. Volunteers were recruited to pluck oiled birds from local beaches. Grebes, cormorants and other seabirds were so sick, their feathers so soaked in oil that they were not difficult to catch. Birds were bathed in Polycomplex A-11, medicated, and placed under heat lamps to stave off pneumonia. The survival rate was less than 30 percent for birds that were treated. Many more died on the beaches where they had formerly sought their livelihoods. Those who had managed to avoid the oil were threatened by the detergents used to disperse the oil slick. The chemicals robbed feathers of the natural waterproofing used to keep seabirds afloat.

In all 3686 birds were estimated to have died because of contact with oil. Aerial surveys a year later found only 200 grebes in an area that had previously drawn 4000 to 7000.

It took oil workers 11 1/2; days to control the leaking oil well. Workers pumped chemical mud down the 3500 foot shaft at a rate of 1500 barrels an hour. It was then topped by a cement plug. Residual amounts of gas continued to escape and another leak sprung up weeks later, releasing oil for months to follow.

Skimmers scooped up oil from the surface of the ocean. In the air, planes dumped detergents on the tar covered ocean in an attempt to break up the slick. On the beaches and harbors, straw was spread on oily patches of water and sand. The straw soaked up the black mess and was then raked up. Rocks were steamed cleaned, cooking marine life like limpets and mussels that attach themselves to coastal rocks.

Union Oil’s Platform A ruptured because of inadequate protective casing. The oil company had been given permission by the U.S. Geological Survey to cut corners and operate the platform with casings below federal and California standards. Investigators would later determine that more steel pipe sheating inside the drilling hole would have prevented the rupture.

Because the oil rig was beyond California’s three-mile coastal zone, the rig did not have to comply with state standards. At the time, California drilling regulations were far more rigid those implied by the federal government.

In the spring following the oil spill, Earth Day was born nationwide. Many consider the publicity surrounding the oil spill a major impetus to the environmental movement.

Only days after the spill began, Get Oil Out (GOO) was founded in Santa Barbara. Founder Bud Bottoms urged the public to cut down on driving, burn oil company credit cards and boycott gas stations associated with offshore drilling companies. Volunteers helped the organization gather 100,000 signatures on a petition banning offshore oil drilling. While drilling was only halted temporarily, laws were passed to strengthen offshore drilling regulations. Union Oil suffered millions in losses from the clean-up efforts, payments to fishermen and local businesses, and lawsuit settlements. But maybe worse, the reputation of the oil industry was forever tarnished.

“I had been impressed by the way energetic college students, shopkeepers, surfers, parents with their kids, all joined the beach clean-up. I saw a Montecito society matron transporting oily birds in her Mercedes.” McKinney witnessed the event firsthand as a volunteer who rescued oiled birds. A chapter of his book A Walk Along Land’s End describes his experience.

“I don’t like to call it a disaster,” because there has been no loss of human life. “I am amazed at the publicity for the loss of a few birds.”

“Never in my long lifetime have I ever seen such an aroused populace at the grassroots level. This oil pollution has done something I have never seen before in Santa Barbara – it has united citizens of all political persuasions in a truly nonpartisan cause.”

“It is sad that it was necessary that Santa Barbara should be the example that had to bring it to the attention of the American people. What is involved is the use of our resources of the sea and of the land in a more effective way and with more concern for preserving the beauty and the natural resources that are so important to any kind of society that we want for the future. The Santa Barbara incident has frankly touched the conscience of the American people.”

The Santa Barbara Oil Spill: A Retrospective
Scroll to top